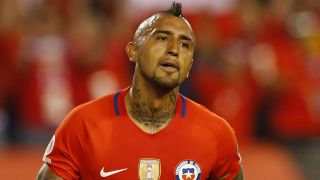 Arturo Vidal apologised for his wastefulness in front of goal after Chile defeated Venezuela 3-1 in CONMEBOL World Cup qualifying.

Alexis Sanchez starred with a goal and Esteban Paredes scored twice as Chile stormed out of the blocks in Santiago on Tuesday.

It could have been more had midfielder Vidal - returning from suspension after sitting out last week's loss in Argentina - was more clinic in the second half.

"When you are playing at the highest level you cannot miss as many goals as I missed," Vidal bemoaned.

"As a team we were good, but I was the one who missed a lot and I apologise to the people and I appreciate a lot the support during the match.

"I attribute it to anxiety. I really wanted to play for Chile. I had two weeks without playing and now I had four clear goals that I lost in front of goal and we could have won 7-1."

Chile - spearheaded by Sanchez's masterclass - raced out to a 3-0 lead inside 22 minutes.

After moving level alongside Marcelo Salas as Chile's all-time leading goalscorer, Sanchez also had a penalty saved in the second half.

Head coach Juan Antonio Pizzi said: "We are a team, and we all have to fight to win.

"We played a very good game, with good level. All players were well.

"It was a very difficult match, from start to finish, we had a lot of strength and a lot of chances to score more."