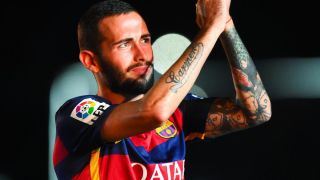 Aleix Vidal says he is ready to make his debut for Barcelona, but concedes it is all in the hands of coach Luis Enrique.

Vidal, an €18 million signing from Sevilla in the off-season, has been unable to play due to Barca's FIFA imposed transfer ban.

The Spanish giants were unable to register any players for twelve months after the governing body found them guilty of irregularities in the signing of foreign players under the age of 18.

However, the ban ended on Monday, meaning Vidal and fellow signing Arda Turan could make their debuts in Barca's Copa del Rey clash against Espanyol on Wednesday.

"I don't think about the 6th [against Espanyol] because I don't know when I will debut and make my first minutes," Vidal told Barca TV.

"The coach knows we have been training for six months and to be ready to contribute when we are needed.