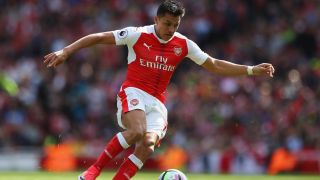 Sanchez, 28, has been linked with a move to Bayern, while Manchester City and Chelsea are also reportedly interested in the forward.

Vidal, who joined Bayern in 2015 and has won back-to-back Bundesliga titles, said he had told Sanchez to make the move.

"I said it was an opportunity for him to be on a big team," he told reporters on Tuesday.

"If you want to compare with the best, you have to go to the best team in the world."

Arsenal's failure to qualify for the Champions League also led to intense speculation over Sanchez's future with the Chilean contracted until mid-2018.

Vidal will get further chances to convince Sanchez to join Bayern as the pair prepare for the Confederations Cup in Russia.

Drawn to face Cameroon, Australia and Germany in Group B, Chile are aiming to add to their 2015 and 2016 Copa America successes.

"Portugal and Germany are the strongest teams," Vidal said. "We also have our strong team, a team that has been playing for a long time and has already won two trophies."