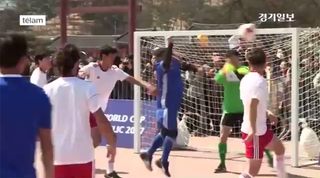 Later on Monday, Maradona went on to draw Argentina with England in the same group for May's FIFA Under-20 World Cup.

The Albiceleste legend, who is an official ambassador of the tournament, was in the Far East to conduct the draw for the competition.

Before that, he had time to take part in a promotional five-a-side match with another famous face, compatriot Pablo Aimar.

At one point, the 56-year-old couldn’t resist punching the ball towards goal in an attempt to replicate the horror moment for England fans at the 1986 World Cup.

This time his effort wouldn’t work out, however, as he missed the target... and picked up a yellow card from the referee for good measure.

If only that was the outcome in the Azteca 31 years ago.