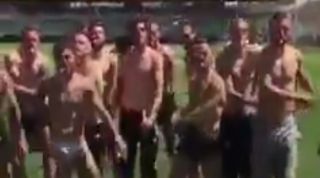 Foggia celebrated promotion to Serie B for the first time in 19 years after a 2-2 draw with Fondi secured their position in Italy's second tier next season.

And now that their rise has been confirmed, the players have been letting their hair down by celebrating in a rather unusual way.

The whole squad were filmed on the pitch at the Stadio Pino Zaccheria in nothing but shorts and underwear, as the players danced to Maldito Alcohol by Pitbull and Afrojack with whistles in their mouths.

We look forward to Chelsea players' rendition of Rockin' All Over The World with kazoos.