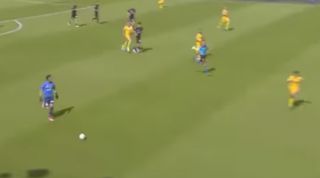 In an Italian second-tier clash between Frosinone and Trapani, the visitors were 1-0 down after Federico Dionisi struck just 11 minutes in.

Clearly lacking faith in his team-mates to restore parity, Trapani keeper Mirko Pigliacelli took it upon himself to get his team back into the game.

The 23-year-old showed guts as he ran almost the entire length of the pitch, beating Mirko Gori in a one-on-one-duel before laying the ball off to substitute Jacopo Manconi on the edge of the penalty box.

Unfortunately, Manconi couldn't apply the finish to cap off what would have been one of the more ridiculous assists football has seen.

The match finished 1-0 to Frosinone, meaning Trapani are just three points off the relegation zone in 18th with two games left of the season to play. Pigliacelli may be reconsidering his position on the pitch for next season.