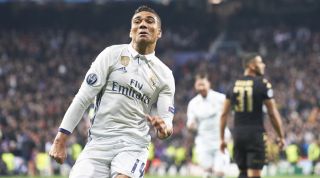 Holding midfielder Casemiro, who had scored just two goals in 81 appearances for los Blancos before this game, produced a stunner against the Serie A club with a dipping volley from 25 yards out.

The goal would prove to be Madrid’s last of the night, giving them a comfortable advantage heading into the second leg at the Stadio San Paolo in three weeks’ time.

Lorenzo Insigne had put the visitors ahead inside eight minutes, but Zinedine Zidane's side were level at half-time through Karim Benzema. Toni Kroos grabbed a second shortly after the interval, and Casemiro struck the killer blow.