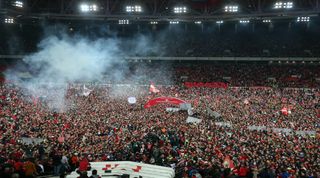 Spartak Moscow were named champions of the Russian Premier League earlier this month, but last night's 3-0 home win over Terek Grozny was the first time the players could celebrate properly in front of their home fans.

The atmosphere was quite something inside the Otkritie Arena during the match, but what followed afterwards was even more special.

Like two sides going to war, thousands of fans stormed the pitch from all angles as soon as the referee blew his final whistle, filling every blade of grass in a matter of seconds.

It was a not a good night to be a steward.