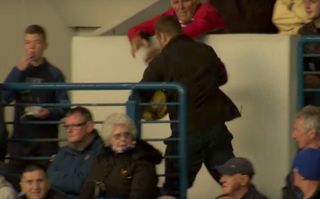 Following a wayward shot from Ryan Christie during Rangers' 2-1 defeat to Aberdeen in the Scottish Premiership on Wednesday night, one Gers fan high up in the stands at Ibrox found himself with the match ball.

Normally the courteous procedure of chucking it back onto the pitch is a simple one, but this rebel had no plans to toe the line. As soon as he grabbed it, the pesky thief sprinted up the steps and out of the stadium.

The only person trying to stop him was an elderly gentleman sitting by the exit gate, who gave his best shot at grabbing the scoundrel before he got away.