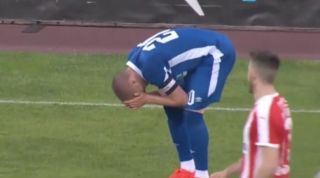 Ten-man Vojvodina lost 2-0 to Red Star Belgrade at the weekend in a fiery encounter which produced five yellow cards and one red.

But that sending-off for Vojvodina captain Nikola Antic was mysterious to say the least, with the player having appeared to do nothing at all wrong against the champions.

Antic left the pitch in tears, with referee Srdan Obradovic possibly having thought that the 23-year-old struck Red Star's Abraham Frimpong. Replays, however, showed little to no contact made, nor any kind of reaction from Frimpong.

"I don’t know why Antic was sent off," he told Croatian newspaper Dnevnik post-match. "It remains an unfathomable mystery to me and I followed the match from the stands. I expect an explanation from the refereeing organisation, but it needs to be specific – not just a case of “Antic cursed the ref’s mother.”

He said: "I feel sorry for him, because he did not do anything.

"When the ref showed him the red card, he cried like a child because he was off for no apparent reason. Nobody said anything or even looked in his direction."

See the weirdness yourselves...