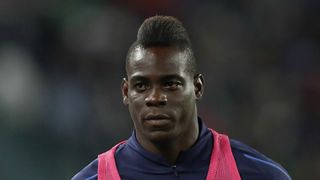 Patrick Vieira is unsure over the futures of Mario Balotelli and Alassane Plea at Nice after the duo were absent for the new coach's first day on the job.

The Nice squad reported back for pre-season training on Monday under the guidance of Vieira, who left New York City FC to take over at the Ligue 1 club.

However, forwards Balotelli and Plea - who both reached double figures for league goals in 2017-18 - failed to show up.

The pair have been the subject of transfer speculation since the end of the campaign; domestic rivals Marseille are reportedly keen on Balotelli, while Plea is attracting interest from a number of Premier League sides.

"I have no information regarding them as it was not planned," Vieira - who was placed in charge after Lucien Favre left for Borussia Dortmund - explained to the media.

"What was planned was to have all the players. Unfortunately, both those players were not there this morning.

"We take this into account and we will discuss it later today with the president."

Asked whether he wanted to keep Balotelli, former France international Vieira replied: "What I want is to keep the players who want to remain in this project.

"Regarding those who don't want to stay here, we'll discuss about them with the president. We'll try to take a decision but more important even, we'll take the right decision for the club."

Crucially, Nice are preparing for a future without Balotelli, who has rekindled his career in France over the past two seasons, leading to a recall to the Italy squad.

"If Mario was looking to leave or was leaving, we have some names [to replace him]," Vieira said. "We have some people working hard to make these players coming here."