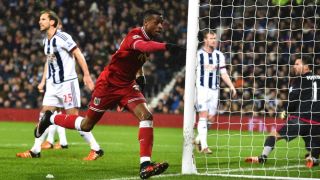 Aston Villa have completed the signing of Bristol City striker Jonathan Kodjia in a deal that could rise to a Championship record £15million.

Villa, relegated from the Premier League last season, will pay an initial £11m to City and have handed a four-year deal to the Ivory Coast international.

Kodjia scored 20 goals in 52 appearances for City after moving to Ashton Gate from French side Angers.

Hull City striker Abel Hernandez had been linked with a move to Villa Park, but the move reportedly broke down due to a failure to agree on personal terms.

The move represents a record sale for City, four times the £3.5m received when Ade Akinbiyi moved to Wolves in September 1999.

It marks another signal of intent from new Villa owner Dr Tony Xia, who has already sanctioned the £12m signing of Ross McCormack from Fulham, while the likes of James Chester and Tommy Elphick have made the switch.