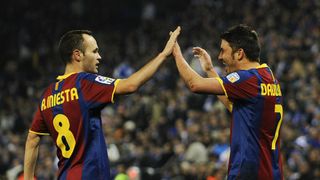 Villa will be reunited with Iniesta at the J.League club after the 36-year-old left New York City at the end of his contract.

Iniesta ended a career-long association with Barca to join Kobe at the end of the 2017-18 season and ex-Germany star Lukas Podolski plays alongside him under head coach Juan Manuel Lillo – a mentor to Manchester City boss Pep Guardiola.

Kobe concluded their 2018 campaign with a 3-2 win over Vegalta Sendai on Saturday, with Iniesta scoring as they took a 3-0 lead.

Although they could only manage a 10th-place finish, Villa was convinced to join after Iniesta spoke in glowing terms of his Japanese experience.

"When I got an offer for this Vissel transfer, I called Iniesta and my wife called and talked to Iniesta's wife," he told a news conference.

"[They spoke about] the goodness of the city of Kobe. He's had a wonderful time with the family here.

"I listened to him talk about the club's cosiness and the club project.

"I got a good impression from Iniesta. He was my team-mate as well as my friend of many years.

"That I can have the challenge of a new project with him feels attractive."