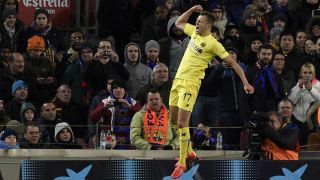 The Russia international enjoyed a successful loan spell with the Liga side in 2014-15, but returned to Madrid ahead of this season in an attempt to prove his worth at the Santiago Bernabeu.

Cheryshev has been unable to secure regular first-team action, though, and only made headlines when Madrid fielded him in the Copa del Rey tie with Cadiz despite being suspended, with the incident eventually ending their cup ambitions as they were thrown out of the tournament.

However, Madrid are in no rush to offload the 25-year-old, irrespective of his limited opportunities.

"We have tried to re-sign Cheryshev, but have not reached an agreement for now," Roig was quoted as saying by Marca.

"He was an important player for us last season. He enjoyed getting playing time and re-establishing himself as a player.

"We have made an effort to bring him back, we tried everything within our powers to get him this transfer market, but it is very difficult."

Roig also had his say on Denis Suarez, who has been heavily linked with a return to Barcelona over the past month, and stressed that the Catalans' buy-back clause on the former Manchester City youngster is only valid at the end of the season.

"Suarez is our player, but with the condition that Barcelona can buy him back at the end of the season," he added.

"We agreed to this term, but we are not considering letting him return to Barcelona halfway through the season. He is an important player for us and is going nowhere now.

"At the end of the season, it is up to Barcelona as to whether they want to bring him back."