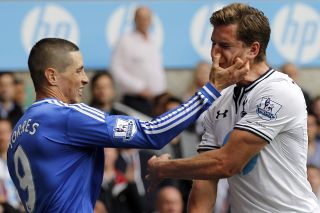 The Chelsea striker was given a second yellow card after a collision with Tottenham's Jan Vertonghen during their Premier League clash at White Hart Lane on Saturday.

However, footage showed that Torres had scratched Verthongen in the face earlier in the game, leading to speculation that the Spain international could see his mandatory one-game suspension extended.

But the FA confirmed on Tuesday that this will not be the case, as referee Mike Dean did not see the incident, while assistant Jake Collin witnessed the pair come together but failed to see the scratch.

Due to the fact the altercation was seen by an official, albeit not in full, Torres will therefore not face a further ban - a decision Tottenham boss Villas-Boas has described as a "disgrace".

"It's extremely difficult to know where to start," he said. "Obviously, it's almost a farcical decision. It doesn’t matter to me which player or club is involved.

"Neither do I want to with my words put into question Fernando’s integrity; neither their manager's in trying to defend our position. I think the FA has made a decision that's almost a joke. It looks incredible.

"How can you see the images and come out without punishment on something that overtakes all professional behaviour?

"I think the decision is a disgrace. If the committee can’t solve such clear images I don’t think it sets a good first example."

Torres will miss Chelsea's trip to Norwich this weekend through suspension, and is set to face a longer spell on the sidelines after injuring his knee in their UEFA Champions League win over Steaua Bucharest on Tuesday.