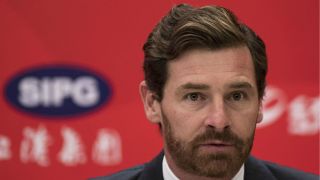 Andre Villas-Boas has vented his frustration at new Chinese Super League rules that will hamper the star quality of his Shanghai SIPG side and many others in the division.

The Chinese Football Association announced plans on Monday to cap the number of foreign players in any CSL side with teams now restricted to fielding three at any given time during a game and naming five in the matchday squad.

A similar situation in Russia forced Villas-Boas to sell Salomon Rondon when he was Zenit boss, preceding his resignation, and the 39-year-old is set to be frustrated again just months after signing a huge deal to manage SIPG.

"This decision should have been made after the season, or with a certain buffer," Villas-Boas is quoted by the South China Morning Post.

"Such a huge change shouldn't be announced about a month before the new season.

"Most of the clubs' team building plans have been in accordance with the previous rules. That's when everyone gets caught off guard."

Additionally, teams must now select a minimum of two home-grown Under-23 players in their matchday squads, with one in the starting XI, another move that has drawn Villas-Boas' ire.

"I know that the Chinese Football Association introduced this new deal to vigorously improve the level of local young players, but it will also lead to high prices for young players, with many purchasers competing for young players, their market value will be a serious bubble," the Portuguese explained.

"Of course we must accept the reality of this situation, after all the new rules have been set, but I still don't think such a short time from the start of the season is a particularly appropriate time to introduce such a new deal."