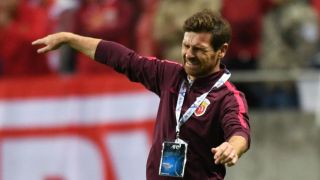 Andre Villas-Boas will take on a surprise new challenge in 2018 when he turns his attention to motorsport and the Dakar Rally.

The former Chelsea and Tottenham manager will swap his football kit for racing overalls when he takes to the wheel of a Toyota Hilux in Lima on January 6, the start of the 15-day race.

Avid motorbike rider Villas-Boas will follow in the footsteps of his uncle Pedro, who took part in the Dakar in 1982, though he was discouraged from his initial plan to tackle the event solo.

"I spoke with my friend Alex Doringer, the manager of the KTM team, who told me that I would still need a full year's preparation to get there [with a motorbike] and that it was better to consider doing it with a car," he said in a statement.

"So I got in touch with Team Overdrive and here I am."

Villas-Boas' Toyota Hilux could be a competitor for glory with Nasser Al-Attiyah having driven the vehicle to victory in the 2016 FIA Cross-Country World Cup.

The Portuguese led Shanghai to second in the 2017 Chinese Super League and the semi-finals of the AFC Champions League in his first year in charge.