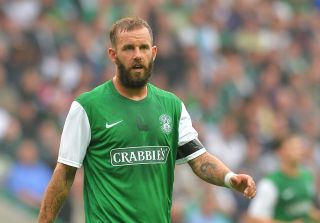 The striker took to social media after the 1-1 Scottish Premiership draw between the two sides in October following comments made by Lennon about a tackle during the game.

The Irishman singled out Vine as an example of what he deemed to be an overly physical approach from the hosts, branding his challenge on Darnell Fisher as "rugby-esque".

Vine subsequently tweeted a scathing response, including a reference to an incident from Lennon's own playing days when he was on the receiving end of a boot to the face from Alan Shearer while playing for Leicester City against Newcastle in 1998.

He wrote: "Read Sir Neil Lennon's comments regarding tackles in y'days game and said my tackle was 'rugby-esque'..I mean I know he likes the snus....

"But has he been smoking something else..I hardly touched the boy and there were no 'reckless' tackles in the game..

"Might get me mate Alan Shearer to send him another size 9 Umbro Speciali in the dish if he don't pipe down..."

The striker subsequently apologised to the Celtic boss, but the Scottish FA have now issued a formal notice of complaint.

Vine has until November 15 to respond, with a hearing date set for November 28.