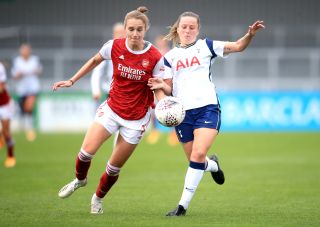 The Dutch striker‚Äôs three goals took her to 52, breaking the mark she previously shared with England and Lyon forward Nikita Parris.

Arsenal were three up inside 15 minutes through goals from Katie McCabe, Miedema and Caitlin Foord.

Miedema, who was making just her 50th Super League appearance, completed her hat-trick before half-time, and Foord added a sixth after the break to maintain the Gunners‚Äô perfect start to the season.

Spurs, who also missed a penalty, had to wait until the 76th minute for a consolation, when Lucia Leon was on target

Arsenal are now clear at the top after Everton‚Äôs 100 per cent record was ended by a 2-2 draw with Brighton.

Rikke Sevecke‚Äôs own goal put Brighton ahead but Everton turned things around through Izzy Christiansen‚Äôs deflected effort and a header from French striker Valerie Gauvin.

It did not prove to be enough, though, with Alieen Whelan clinching a point for Brighton with 12 minutes remaining.

Alessia Russo scored twice as Manchester United beat West Ham 4-2 to continue their unbeaten start to the season and leave their opponents still searching for a first win.

USA international Tobin Heath doubled United‚Äôs lead in the 23rd minute with her first goal for the club after Russo had opened the scoring.

Emily Van Egmond pulled one back for West Ham in the 39th minute but Russo restored United‚Äôs advantage before half-time.

Rachel Daly‚Äôs looping cross beat Mary Earps as the Hammers found another with seven minutes left but Christen Press eased United‚Äôs nerves with a fourth to secure the points.

Manchester City were unable to bounce back from last week‚Äôs defeat by Chelsea as they were held to a 1-1 draw by Reading.

The home side took an early lead at the Madejski Stadium when Amalie Eikeland headed home. City equalised in the 56th minute through Sam Mewis but could not find a winner.

Rachel Corsie opened the scoring with her first Birmingham goal and Mollie Green then followed suit to make it 2-0 at half-time.

Walker then added a third with a curling shot and Christie Murray grabbed the fourth from the penalty spot while, to add to Bristol‚Äôs miserable day, Aimee Palmer needed oxygen after suffering a serious-looking injury.

Abbi Grant was sent off for Birmingham in stoppage time.