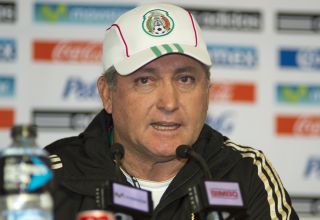 Vucetich was made Mexico's head coach last month as a replacement for Jose Manuel de la Torre, who was sacked after the Mexicans' 2-1 loss at home to Honduras on September 6.

The World Cup qualifier against Panama in Mexico City on Saturday will be Vucetich's first in charge of the home side and with qualification effectively on the line, the 58-year-old knows how important the game will be.

"Right now, yes, this is going to be the biggest game of my life," Vucetich said.

"Definitely because of everything that we are playing for.

"We know what this game means and the commitment we're taking on.

"I've taken on this challenge knowing everything that is riding on this game and I trust in each and every one of the players because I know the majority of them and have seen them play over the years."

Mexico sit fifth in CONCACAF's standings with eight points in the confederation's fourth and final stage of qualifying with just two matches remaining.

The top three teams in CONCACAF's fourth round will qualify automatically for Brazil 2014 with the United States (16 points), Costa Rica (15) and Honduras (11) holding those spots heading into Friday's qualifiers.

The fourth team, which is currently Panama (eight points), will play a two-legged play-off with New Zealand for a spot at next year's World Cup finals.

If Mexico lose to Panama and Honduras claim at least a point against Costa Rica, Vucetich's team will be unable to qualify automatically for the World Cup but the coach is confident his side is ready to go on Saturday.

"I know what we've been working on these last 10 or 11 days and I feel very calm and good about what we've achieved and about the commitment that the team has taken on from a sporting perspective towards the game," Vucetich said.

"I think the team has worked very well with a great attitude and we know what there is to do."

If Vucetich's side lose, Mexico will need to win away to Costa Rica on the final matchday, while they will also need the USA to overcome Panama and have a better goal difference than the Panamanians to reach the intercontinental play-off against New Zealand.