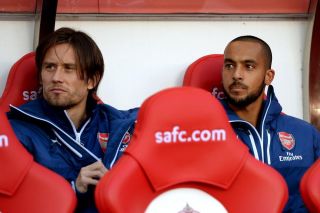 Winger Walcott has not played a competitive match for Arsene Wenger's men since January after damaging cruciate ligaments in an FA Cup tie with rivals Tottenham.

The 25-year-old is nearing a return to first-team action and was named on the bench for last weekend's 2-0 win at Sunderland.

However, Wenger stated that he will not be risked from the start in Saturday's clash with Sean Dyche's side, while he also confirmed that fellow England international Wilshere is unlikely to play, although his injury is not serious.

"Theo Walcott is not completely ready," he said. "He's been out for too long to start.

"Jack Wilshere got a kick on his knee, it is very, very short term."

Wenger, who should have full-back Kieran Gibbs available despite suffering with a hip complaint, also refused to give up the ghost in the hunt for the Premier League title.

Arsenal already find themselves nine points adrift of leaders Chelsea, with some tipping Jose Mourinho's men to emulate Arsenal's "invincibles" side who went unbeaten under Wenger in the 2003-04 campaign.

Wenger, though, believes such comparisons are premature.

"It's too early [to say Chelsea can emulate the "invincibles"]," he said. "[Our title odds] do not consider the teams we have played. I have a strong belief we will come back.

"We want to be good enough to get around teams who try and stop us from playing. Our attitude and dedication has been fantastic. On the efficiency front we could do better."