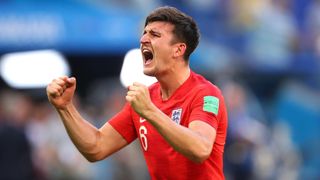 Maguire's first-half goal put England in front against Sweden, with Dele Alli's effort after the break securing a 2-0 victory in Samara on Saturday.

The Leicester City centre-back has become a social media star during the tournament, with a photograph of him speaking to fans turning into a meme.

And Walker was quick to use the snap to mock Maguire despite the defender's first England goal setting up a semi-final clash with either Croatia or hosts Russia.

Yeah so a good header doesn’t hurt. I mean the moment you head it proper, you feel it’s a good one. Know what I mean love? July 7, 2018

Maguire saw the funny side of his team-mate's tease, replying to Walker's tweet with a pair of cry-laughing emojis.