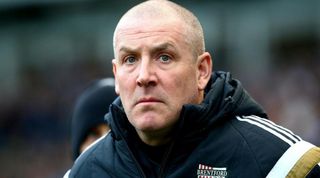 Speculation has raged over Griffin Park for a number of weeks that Warburton could depart the club, despite leading them from League One to a Premier League promotion push in his time in charge.

Three defeats in four games have seen Brentford drop out of the Championship's top six in recent weeks, with some suggestion that uncertainty over the manager's job security had been a factor.

And club owner Matthew Benham has now moved to clarify the situation, revealing plans for a managerial restructure - which Warburton does not wish to be a part of.

A statement read: "Matthew Benham has met with sporting director Frank McParland, manager Mark Warburton and assistant manager David Weir and the club has reached agreement on terms for their departure.

"The board, with Matthew’s approval, has made the decision that the trio will leave Brentford at the end of the 2014-15 season.

"Mark and David will continue to work with the first team on a day-to-day basis through to the end of the season - with the support and backing of Matthew and the club’s board - as Brentford push for promotion to the Premier League."

McParland - responsible for bringing through the likes of Raheem Sterling, Jordon Ibe and Jhn Flanagan in his time as Liverpool's academy director - has been placed on gardening leave.