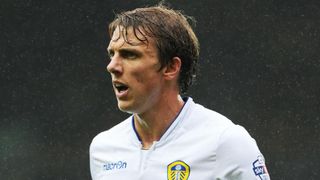 Derby County have strengthened their promotion-chasing squad further with the signing of Leeds United captain Stephen Warnock on an 18-month deal.

The defender arrives at Pride Park after the two Championship clubs agreed an undisclosed fee for the 33-year-old, whose contract was due to expire at the end of the season.

Warnock joins Steve McClaren's side as they look to maintain a promising first half of the season that sees them sit joint top of the table after 25 games.

McClaren is delighted to have signed the experienced full-back – who has two England caps – and says he will provide good competition for places within his squad.

"He is a solid and experienced defender who certainly strengthens our defensive options for the remaining months of the season.

"The next few months are going to be extremely important for us and it is vital to have a strong squad to call upon.

"As well as being a very good player he has excellent leadership qualities."