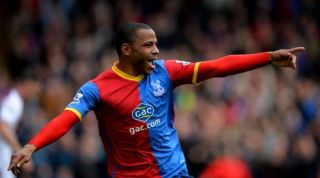 Puncheon was fined £15,000 and warned about his conduct after a tirade aimed at Warnock in March following criticism of the former Blackpool wideman's woeful penalty miss in a Premier League clash at Tottenham.

Warnock, who returned for a second spell as Palace boss on Wednesday, had said on talkSPORT: "There's no way I would've trusted him with a penalty.

"You've got to have somebody a little bit more cool, and he's not like that, Jason.

"He can whack a 35-yard free-kick in here and there but a penalty, with all the pressure on him at a place like White Hart Lane - not in a million years for me."

That prompted an angry reaction from Puncheon on social media, but Warnock is not dwelling on the past and revealed that the 28-year-old will be in contention to face Newcastle United on Saturday in his first game back at the helm.

"Me and Jason Puncheon have had a good talk and I'm delighted with him. If he gets his head right, he's as good as any in the league," said Warnock.

"He's a really good chap, he will be involved in Saturday."