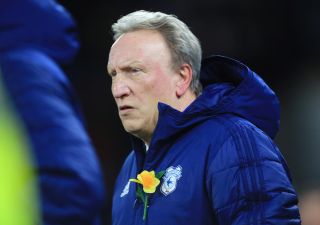 Cardiff manager Neil Warnock would take his team off the pitch if his players were subjected to racist abuse and nothing was done about it.

England players Danny Rose and Callum Hudson-Odoi had racist chants directed at them during the 5-1 Euro 2020 qualifying victory over Montenegro on Monday night.

Chelsea, meanwhile, lodged a complaint with UEFA regarding alleged racist abuse towards winger Hudson-Odoi during their 5-0 Europa League win over Dynamo Kiev in the Ukrainian capital on March 14.

The Football Association described the incidents in Podgorica as “abhorrent” and governing body UEFA subsequently opened disciplinary proceedings against Montenegro, including a charge of racist behaviour.

There have been calls for the punishments to be harsh, while England manager Gareth Southgate has also underlined the need for education to try to tackle the issues head-on.

Bluebirds boss Warnock would have no hesitation in taking direct action over any such behaviour towards his players from the stands.

“It’s got to be more severe than a fine or a slap on the wrist,” Warnock said about possible sanctions.

“A manager has got to take a team off or ban a team from the tournament, probably immediately, as well if that’s the case.

“The deterrent has got to be far worse than it is. I would take a team off if that’s what happened, the referee was informed and didn’t do anything about it.”