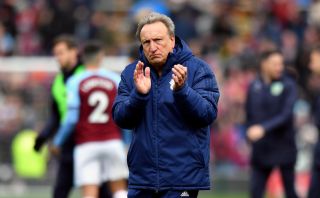 Cardiff manager Neil Warnock believes Manchester United will not return to the pinnacle of English football for at least a decade.

Warnock’s final game as a Premier League manager – for now at least – comes at Old Trafford on Sunday as Cardiff and United bid farewell to forgettable campaigns.

Cardiff’s instant return to the Sky Bet Championship was sealed last weekend, while sixth-placed United have failed to qualify for next season’s Champions League following a turbulent campaign.

United sacked Jose Mourinho in December amid a backdrop of dressing-room disharmony and his successor Ole Gunnar Solskjaer, after an initial winning surge, has won only two of his last 11 games.

Solskjaer’s side enter the final weekend of the season a whopping 29 points off top spot, and the Norwegian says it would be “miraculous” if United were challenging the likes of Liverpool and Manchester City for the league title next season.

“It’s been a difficult period for him,” Warnock said when asked about Solskjaer’s difficult end to the season.

“People say it might take two or three windows, I think it could be 10 years, 15, who knows?

“They’ve got to catch up with Manchester City and Liverpool and it will not be easy.

“But they will come back and be just as good as what the other two are now.”

Warnock puts United’s decline down to poor player recruitment over the last few years and the loss of traditional values in failing to give young players first-team opportunities.

But the 70-year-old Yorkshireman is delighted his final Premier League game will be at Old Trafford.

“They have wasted a lot of money,” said Warnock, who has one year left on his Cardiff contract and has received the backing of owner Vincent Tan to stay in the Welsh capital next season.

“Are they any better off than when David Moyes was there? They’ve spent about £400million since then.

“Over the past few years, I’m not sure how much thought has gone into some of the signings.

“But what better place to have your final game in the Premier League than at the Theatre of Dreams?

“No disrespect to all the other clubs – Anfield is tremendous as well – but where I come from, Manchester United was the place and it’s always got a special atmosphere.

“I think they are going to go back to the Manchester United values now – signing young players.

“That type of is what they want now. They have nothing to lose. They have got to generate that enthusiasm and verve that you get with young players.”