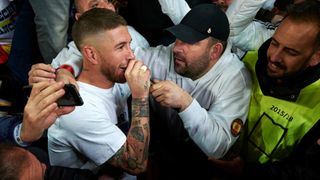 Impressive with a ball at his feet but Sergio Ramos is just as good with a microphone.

The Real Madrid captain was in a jovial mood as he took a microphone and sang with fans after the titleholders reached a third successive Champions League final.

And Ramos revelled in the result with supporters afterwards in the Spanish capital as Madrid stand on the cusp of an unprecedented third consecutive Champions League crown in Kiev on May 26.