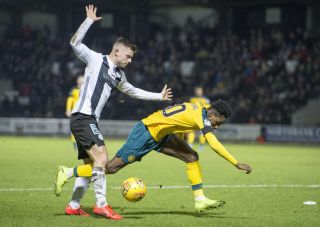 St Mirren’s Calum Waters will enjoy the crowd scenes when he returns to a packed Ibrox to play Rangers on Wednesday night.

The 23-year-old defender was on loan at Dumbarton from Celtic, where he started his career, when he first tasted the Govan experience.

Rangers were coming through the leagues after financial problems in 2012 saw the club re-emerge at the bottom tier of Scottish football.

There was 48,568 inside Ibrox on April 5, 2016 when Rangers beat the Sons 1-0 to seal the Scottish Championship title and promotion into the top flight.

Waters, on a second loan spell at the Buddies from Kilmarnock, recalled the game.

He said: “I’ve only started one game at Ibrox and it was at Dumbarton when I was 19 on loan from Celtic.

“It was really good actually as it was the day when if they won they could get promoted back up to the Premiership.

“It was a full house so hopefully it will be like that on Wednesday. More of the same would be good.

“It was the first time I had played in front of that kind of crowd but it was such a good experience.

“Although we got beat, we did pretty well that night and it was a really good experience.”

St Mirren will have several players playing at Ibrox for the first time and Waters’ advice was simple.

He said: “Probably just don’t get too emotional with the crowd and stick to the game plan.

“Try to block them out and if you get the ball you need to make the most of it because you don’t really get it very often.”

Jim Goodwin’s side go into the game on the back of a commanding 3-0 William Hill Scottish Cup win over Broxburn Athletic and Waters recognises the contrast in the level of Saints’ upcoming opponents.

He said: “It is two polar opposite games, going from having 78 per cent possession to the flip side of that, not having as much.

“But we are used to that, most of the time we sit off teams, so we will be prepared for the game.

“You cannot ball watch, you need to watch what is going on around you. It is just down to concentration.

“They are probably the form team in the league at present so we will definitely need to be prepared for it.”