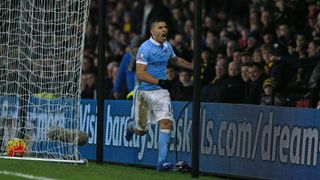 Yaya Toure and Sergio Aguero dragged Manchester City back from another away day shocker as Manuel Pellegrini's team completed a late 2-1 comeback win at Watford.

City, who last won on the road in the league at Crystal Palace in September, looked set to slip six points behind leaders Arsenal in a tumultuous title race when Aleksandar Kolarov headed into his own goal after 55 minutes.

Serbia defender Kolarov atoned for his error, however, by delivering the corner that Toure met with an emphatic left-foot volley eight minutes from time.

City remain third in the table, a point shy of second-placed Leicester, while Watford manager Quique Sanchez Flores will reflect on a desperately unlucky run of one point from impressive festive displays against Chelsea, Tottenham and Pellegrini's men.

Jose Holebas came into the home line-up for the suspended Nathan Ake and full-back Allan Nyom replaced Ikechi Anya, while City were unchanged.

Watford looked to start on the front foot and Almen Abdi fired over from the right-hand edge of the penalty area.

The in-form Ighalo then manufactured space and forced Joe Hart to save with his legs before Sagna scrambled clear to spare a creaking City backline.

At the other end, Heurelho Gomes pushed an awkwardly-bouncing Kevin De Bruyne strike narrowly over the head of the on-rushing Aguero.

The former Tottenham goalkeeper came out to deny Fernandinho, who was looking to latch on to David Silva's 29th-minute pass, and Raheem Sterling blazed over amid the ensuing scramble.

Nyom was rightly booked for an awful dive in the City box but there was more to admire about Watford's attacking play early in the second half, as Hart plunged low to his right to tip a Ben Watson drive around the post.

Fernandinho leapt unchallenged to head over from Silva's 54th-minute corner before Kolarov absent-mindedly glanced Watson's set piece into his own net a minute later.

Toure, so often the man City turn to in times of need, broke up a 68th-minute Watford attack but could not find the finish from De Bruyne's return pass.

But, after Gomes again denied De Bruyne and Watford midfielder Etienne Capoue wasted a chance to make it 2-0, Toure made his mark by thundering Kolarov's corner into the top corner.

There was worse to come for Flores' team as, having contained an off-colour Aguero with relative ease, they watched the Argentina star spark delirious celebrations in the away end.

- Sergio Aguero has now scored against 24 of the 28 different Premier League teams that he has faced in the competition.

- Manchester City are now unbeaten against the Hornets in their last nine encounters in all competitions (W7 D2).

- There were just two minutes and 36 seconds between Manchester City’s equalising and winning goals in this match.

- All seven of Watford’s Premier League defeats this season have come against the current top seven in the table.