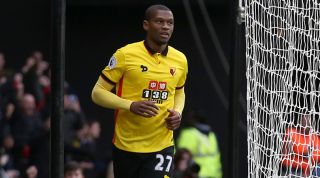 The 26-year-old has made 13 appearances for Watford this season since signing from Genk last summer, and has managed three goals for the Hornets despite being a centre-back.

But one Watford fan clearly hasn't been paying enough attention, having succumbed to a case of mistaken identity by sending Kabasele a picture of former striker Odion Ighalo for him to sign.

Fortunately the Belgian took the image well, posting his amusement on Twitter.

Ighalo now plays for Chinese Super League club Changchun Yatai, having joined them in January for around £20m. In Watford's first season in the Premier League, the Nigerian scored 15 goals to help steer the Hornets well clear of relegation.