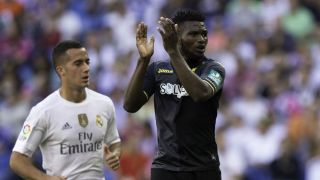 Watford have forked out a club-record fee to bring Granada forward Isaac Success to Vicarage Road.

The Nigerian forward has signed a five-year deal at the Premier League club for a fee reportedly in the region of £12.5million.

The 20-year-old becomes Watford's third signing of the close-season, following Jerome Sinclair and Christian Kabasele to the club.

And the Hornets, now coached by Walter Mazzarri, are particularly well-stocked at the top of the pitch, with captain Troy Deeney signing a new five-year contract on Friday and reports of the club turning down a lucrative offer for Odion Ighalo from Chinese Super League club Shanghai SIPG.

Mazzarri's men begin the new Premier League campaign away at Southampton on August 13.

OFFICIAL: is delighted to confirm the signing of forward Isaac Success for a club record transfer fee. July 1, 2016