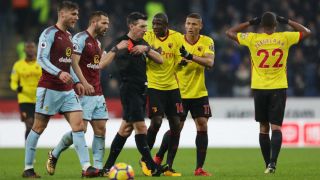 Watford will be without defender Marvin Zeegelaar for three matches after his appeal against a red card picked up at Burnley on Saturday was rejected.

Zeegelaar was dismissed six minutes before half-time for jumping in two-footed on Steven Defour, with Burnley scoring the only goal of the game through Scott Arfield soon after.

The Dutch defender did appear to make some contact with the ball, leading Watford coach Marco Silva to label the decision as "harsh" after full-time.

However, their bid to get the red card rescinded has been unsuccessful, with Watford revealing the news on Twitter on Tuesday.

| will be without Marvin Zeegelaar for the next three games after the club's appeal against his red card at Burnley on Saturday proved unsuccessful.December 12, 2017

They wrote: "Watford will be without Marvin Zeegelaar for the next three games after the club's appeal against his red card at Burnley on Saturday proved unsuccessful."

Zeegelaar will miss trips to Crystal Palace and Brighton and Hove Albion either side of Huddersfield Town's visit, returning in time for the Boxing Day clash with Leicester City at Vicarage Road.