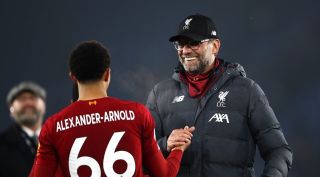 Jurgen Klopp’s side had opened up a 25-point lead at the top of the table before the league was suspended due to the coronavirus pandemic earlier this month.

It is not yet clear when the 2019/20 season will resume, and there have even been calls for the campaign to be declared null and void.

But Rooney, who currently plies his trade as a player-coach at Derby, believes it would not be right if the Reds were denied a first league title since 1990.

“Liverpool will win the Premier League,” he told The Times. “Now, as you can imagine, I have Everton fans phoning me up saying: ‘The season has to be cancelled!’

“And, of course, as an Evertonian and someone who played for Manchester United for 13 years, there’s a bit in me that thinks that would be good…

“But no, Liverpool have been fantastic. They have put so much work in. They deserve this title. Can you imagine waiting 30 years and then having it taken away like this? The right decision [to try and complete the season] has been made.

“It’s also right in terms of promotion and relegation and Champions League places. These issues are so big for the clubs involved that I imagine there would be a lot of legal fights if the season was just abandoned. The fair thing is to finish 2019/20 – even if we have to lose next season in the process.