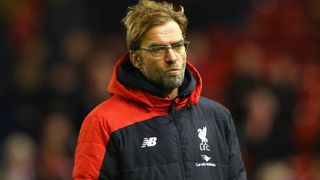 Liverpool manager Jurgen Klopp bemoaned his side's lack of concentration and said they must work on defending set pieces.

Second-half substitute Joe Allen rescued a point for Liverpool in an entertaining 3-3 draw at Anfield on Wednesday.

Liverpool led twice thanks to goals from Roberto Firmino but were pulled back by Aaron Ramsey and Oliver Giroud, before the latter put Arsenal ahead early in the second half.

Giroud's equaliser came from a corner, and Klopp said his men need some work on the training ground to limit the goals they concede from set pieces.

"We have to defend set plays better; it’s an easy thing to say but we have to work on it and we will work on it. We will analyse it, of course, and we have to do it better," the German manager said.

"Then a little bit of losing control and especially around the second goal because Giroud was on the ground after a challenge. We stopped the game a little bit but it wasn’t stopped and they used the situation to make another easy goal.

"We lost control and it wasn’t too easy, we lost the ball easily. They are strong on counter-attacks, everybody knows this and so we had to defend."

Klopp added: "In the second half we were again in the game; it was a little bit more open than the beginning of the first half but we came back into the game. At the end, it was brilliant from Giroud but in the beginning we have to defend it better – it was not too difficult. We have to be more concentrated in situations like this.

"Then you need a little bit of luck and we had it. We changed players and it was a perfect ball for Christian [Benteke], a perfect header and a perfect finish. I think it was a well-deserved draw in an all-time spectacular game."

Liverpool must now recover and prepare for their Premier League clash with Manchester United on Sunday.