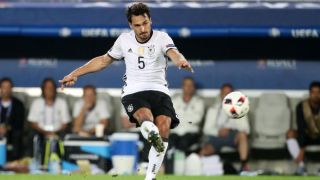 Mats Hummels conceded the penalties Germany took in their shoot-out win over Italy on Saturday were not typical of the national team.

The world champions earned a place in the semi-finals of Euro 2016 by winning 6-5 on penalties after extra time had ended with the teams locked at 1-1.

But centre-back Hummels, who will miss the semi-finals due to suspension, told BBC World Service: "We didn't shoot like a German team.

"You won't believe it, but yes we [practised penalties] in training a few times.

"I was very happy that I did because I worked out which shot would work well for me today [Saturday] - because it worked well yesterday.

"It's hard to simulate the real situation."