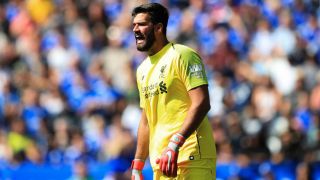 Liverpool defender Joe Gomez insists they do not want Alisson to change his style despite his mistake gifting Leicester City a goal in Saturday's Premier League match.

The goalkeeper made a mess of a turn with the ball at his feet and lost possession to Kelechi Iheanacho after 63 minutes at the King Power Stadium, allowing Rachid Ghezzal to score.

Liverpool held firm to claim a 2-1 win thanks to first-half goals from Sadio Mane and Roberto Firmino, meaning Jurgen Klopp's side head into the international break at the top of the table with four victories from four.

And Gomez does not think the error means Alisson, who became the world's most expensive goalkeeper when he joined from Roma for £66million before Kepa Arrizabalaga arrived at Chelsea, should try to change his game.

"That is his style of play and I think everyone wants him to continue doing that," said the defender. "All the time, he gives us that confidence that we can play, and it relieves a lot of pressure for us.

"Everyone has their style of play and we don't want him to change. I think he's confident and will continue to do so."

Gomez was delighted with Liverpool's response to the goal, as they held firm under some second-half pressure to keep up their winning run.

"As a team, we play for clean sheets, that is important and it's the foundation for you because if they don't score you can't lose," he said. "It's going to happen, though. We're bound to concede goals, but the main thing is the reaction. We didn't drop our heads and we knew we could withstand the pressure and that is the main thing. We'll take the three points over the clean sheet.

"The main thing is that we've come away with 12 points. I'm happy we've had a good run so far but it's about continuing it now. Every game is different, we've had different challenges over the four games so far and it's about adapting. It's very early doors and we all know that, but we want to keep the momentum going after the international break."

Gomez will now join up with the England squad for the UEFA Nations League matches against Spain and Croatia, having earned a recall after missing the World Cup due to an operation on an ankle injury.

The 21-year-old was disappointed to miss out on his country's run to the semi-finals in Russia but is happy to be back in Gareth Southgate's plans.

"I was watching it like any other fan but I was disappointed not to be there," he said. "I'm over it now and it's about moving on; I can't dwell on my own disappointment. I've just got to move on and I'm happy to be back in the squad.

"We spoke quite a lot before the World Cup. We were sort of unsure before whether I was going to have the operation or not. He's a great manager and we obviously had contact and he wished me well. After that it was about supporting the team and I'm looking forward to being back."