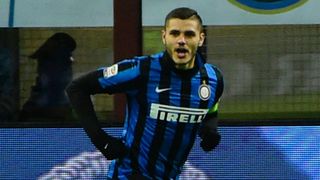 Inter's sporting director Piero Ausilio has stressed he never doubted Mauro Icardi, after the Argentinian made up for a crucial penalty miss in Sunday's Milan derby by scoring the winner against Chievo on Wednesday.

Icardi's first goal since January 6 came when he thrashed home from a corner just after half-time as Inter saw off the visitors 1-0 at San Siro just three days after fluffing his lines from the spot against rivals AC Milan.

Ausilio - standing in for head coach Roberto Mancini, who served a touchline ban after his dismissal in the derby - praised the 22-year-old's contribution.

"I knew Icardi would do well," he said. "I said he'd start today because the coach told me he would before the news conference yesterday.

"I totally believe in Mauro. His numbers are very impressive given how young he still is. I'm sure he'll be in double figures before the end of the season. He's always scored goals, ever since he was a 19-year-old at Sampdoria.

"He's a bit below his average at the moment but I'm sure the goals he scores will be enough for his and our needs."

Icardi insisted that his failure from 12 yards on Sunday did not affect his mindset going into Wednesday's game.

"I think that my job is to score goals," he told Sky Sport Italia. "The penalty in the derby I struck well. I had a bit of bad luck, because I hit the post.

"I have not felt boos for me. I think the people love me. Every so often, when you have bad games, people want a little more. It applies for everyone. The boos were not just for me.

"We have to improve because, when we go ahead, we relax a bit and go to play the ball behind. We must do the opposite and go forward."