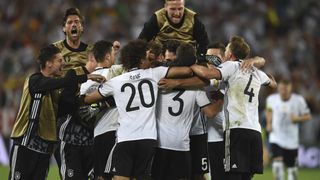 Germany coach Joachim Low insisted his team deserved their win over Italy in the Euro 2016 quarter-finals on Saturday.

Jonas Hector netted the winning spot-kick, after Manuel Neuer made two saves, as Low's men claimed a 6-5 shoot-out victory after a 1-1 draw in Bordeaux.

They may have needed penalties, but Low felt Germany were unquestionably the better of the two teams.

"It was a game on a very high tactical level from both sides," he said.

"I think we were superior, the Italians' strength was in the centre and we did well to contain them. I didn't think they would score but the penalty was unfortunate.

"Of course it was lucky in the end but through the game we were superior, we had two or three more chances than them.

"We could have won the game when [Mario] Gomez was alone in front of [Gianluigi] Buffon but Buffon saved very well."

Thomas Muller, Mesut Ozil and Bastian Schweinsteiger failed to convert their penalties, but Neuer managed to keep out efforts from Leonardo Bonucci and Matteo Darmian.

Low said he had little say in who took Germany's spot-kicks, but praised the likes of Hector, 26, and Joshua Kimmich, 21.

"I did not have any influence. The first five decided quite quickly and then you have to let players choose depending on their feelings," he said.

"We have some good penalty takers even though we missed some.

"What was positive was that the youngsters Hector and Kimmich stepped forward and, in such an atmosphere, that they kept calm."

Low had a much bigger say during the 120 minutes, opting for a back three to try and counter Antonio Conte's men.

It seemingly paid off as Ozil gave his side the lead in the 65th minute, only for Jerome Boateng to handle in the area to concede a penalty that Bonucci converted.

Explaining his formation, Low said being tactically flexible had been a focus for his team since their 2014 World Cup win.

"After the World Cup it was apparent we had to change a little bit otherwise the opposition would know us too well," he said.

"We have trained with it and used it in March against Italy so it wasn't such a big change for the side.

"France will be different opposition, I will have to see how to play that match, or Iceland of course."