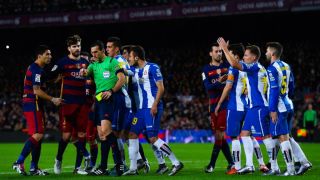 Espanyol midfielder Papakouli Diop has denied his team-mates were violent during Wednesday's Copa del Rey loss to Barcelona, suggesting their opponents could have left the field on stretchers.

Barca ran out 4-1 winners against their Catalan neighbours in the first leg of their last-16 Copa clash at Camp Nou in a game that saw Diop and team-mate Herman Perez dismissed.

In a lively encounter, Diop and Perez were sent off inside the final 15 minutes, with the former shown a second yellow card for swearing at Barcelona forward Luis Suarez.

Suarez is accused of provoking a confrontation between players from both sides in the tunnel afterwards and Diop maintains the striker should also have been dismissed during their second-half exchange.

"You cannot say we were violent. There wasn't any blood - if we had wanted to, the Barca players would have gone off on stretchers," Diop told Carrusel Deportivo.

"[Suarez and I] both insulted each other. He said swear words to me, and me to him, and I get sent off. The referee told me he didn't hear us both, only me.

"[The press] have spent all week saying we are violent and this has had its effect. [Barca's players] are really good and if you cannot even touch them, they can do what they want."

Barca will travel to the Cornella El Prat next Wednesday for what is set to be another heated contest, with Espanyol striker Gerard Moreno predicting the second leg will be a war.

"After the game we went to thank our fans for coming to support us. And when we reached the tunnel, [Barca players] were waiting for us," he is quoted by El Pais.

"I don't know if it was to tease or insult us, but it was to continue provoking. There were a lot of people there; there was a lot of noise. I won't say names, that stays within.

"We defend our badge and values and if we are provoked, we have to react, although it’s not the best example to set.

"Wednesday will be another war and we will fight as we have nothing to lose."