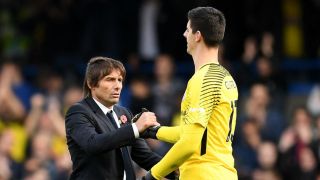 Thibaut Courtois insists that Chelsea are ready to fight for under-fire coach Antonio Conte, with the Belgian eager to avoid a repeat of the situation which resulted in Jose Mourinho's sacking in 2015.

Mourinho paid the price for Chelsea's poor start to the 2015-16 season, with the Portuguese coach dismissed after the side lost nine of their first 16 league games.

Conte was then brought in as his full-time successor at the end of the season and went on to lead Chelsea to the Premier League title in his first season last term.

Chelsea's title defence has not got off to the best of starts this year, with Conte's men losing three of their nine games so far, but they showed character in Saturday's 4-2 win over Watford, emerging victorious thanks to two late goals despite falling 2-1 behind just after the break.

And Courtois, who made his 100th Premier League appearance against Watford, is adamant that the players are up for a scrap in order to keep the Italian in the job.

Congratulations to @thibautcourtois who today made his 100th appearance in the Premier League! pic.twitter.com/uGmJTZfvs5

"We are ready to fight for the coach," Courtois told the London Evening Standard.

"I remember what happened two years ago under Jose Mourinho and things started to be said, there were stories about the dressing room without knowing what was happening.

"We are happy to show that we are ready to fight. We all know what would have happened [extra speculation about Conte's future] if we had lost against Watford.

"There was a moment when we were 2-1 down, we were having difficulties and Watford could have made it 4-1. It was very important to come back to win.

"In 2015 [under Mourinho] we wanted to fight as well but the game didn't turn out well for us, there was too much bad luck. Sometimes different things happened.

"Some of us remember what happened two years ago and we don't want the same thing to happen."

Speculation has suggested that some Chelsea players have grown frustrated with Conte's training methods this term, but Courtois dismissed those rumours as nonsense.

He added: "Every manager has his own routine. With Antonio we do a lot of tactical sessions and drills. We are fine with it.

"Last season we were champions with his way and we trained much more than this season, so I don't know why somebody would complain. It's not as if we don't like to train."