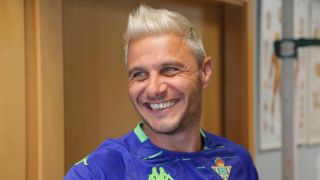 Most men would take comparisons to David Beckham as a major compliment given his global status as a fashion icon.

But in the case of Real Betis and Joaquin we can't help but feel there is an element of one's tongue being firmly in the cheek.

The veteran winger returned for pre-season with a daring new bleach-blonde hairstyle, which was captured on Betis' Twitter account.

Accompanying the picture was the caption: "We heard some rumours during the holidays but we thought it was fake. Now it seems it was true. Welcome back, 'David Beckham'!"

Former Manchester United and Real Madrid star Beckham was not averse to a brave hairdo or two during his playing career, perhaps most famously sporting a mohawk that became the trend in classrooms around the United Kingdom.

Check out Joaquin's look below. *WARNING* - you may want to wear sunglasses.

We heard some rumours during the holidays but we thought it was fake Now it seems it was true Welcome back, 'David Beckham'! July 6, 2018

Betis' social-media game has been on point this week, with the club producing an elaborate video to welcome Joel Robles to the club on Thursday. We're not sure about the former Everton goalkeeper's acting skills, though.