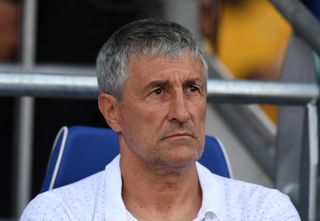 Barcelona boss Quique Setien maintains he will work with what he already has if the club are unable to bring in a striker on an emergency transfer.

Ousmane Dembele has been ruled out for six months after undergoing surgery on a leg injury, while Luis Suarez is recovering from a knee problem.

Barcelona have requested special dispensation to sign another attacker outside the transfer window to help fill the void, with Getafe’s Angel Rodriguez and Mallorca frontman Ante Budimir reported targets.

Setien is confident Barcelona will be able to source some extra cover, but will not lose sleep over a perceived lack of options.

“I am always prepared for whatever comes up, work with what I have,” he said at a press conference broadcast by the club. “Everybody would like to have their team better than they are, but we will adapt to the situation.

“We must wait for the response to see if we can sign (another striker). The club is working on it.

“If we are given permission to sign a player, it is preferable, but we will always find a plan – because in the end you have to play with 11. We will adapt, find a solution and the way forward.”

On Saturday Barcelona host Getafe, who have been the surprise package of the LaLiga campaign, with four straight wins putting them third above rivals Atletico Madrid.

Setien, though, knows there is plenty more football to be played before the championship trophy is handed out.

“Many league titles have been decided on details, in the final minutes, or in situations which neither team is able to control,” the Barcelona coach said.

“We are just as much favourites as Real Madrid. They have a three-point advantage (at the top), but we have a game there at the Bernabeu.

“When the moment comes we have a lot of expectations. We know the importance of the game and will go all out for it.”

Setien is expecting a stern test on Saturday against one of LaLiga’s form teams, with Getafe having beaten Valencia 3-0 last weekend.

“Getafe are definitely a team who are very committed and difficult to beat, right now they are in good form,” the Barcelona coach said.

Right-back Nelson Semedo is back in the squad, but defender Clement Lenglet is suspended following his red card in the win at Real Betis.

Marc Cucurella is expected to face his parent club, the 21-year-old wing-back having been loaned out for the season after Barcelona activated a buy-back clause from Eibar.

Cucurella, whose move to Getafe could become permanent in the summer, feels coming through the Cantera is perhaps no longer such a straightforward path to the Blaugrana’s first-team.

“I think that at Barcelona, it’s a huge club, and at the end it’s important to win. They don’t have the patience they once had,” Cucurella said at a press conference, reported by Spanish media outlet AS.

“As an academy player, they don’t give the opportunities that players deserve. It is unfortunate because I hope they would have more trust in the academy.

“In football, it is important to win – and winning has more weight than having patience.”

Cucurella hopes Getafe can produce what would be a first league victory away at the Nou Camp.

“We come into the game with some good results behind us and we are going well,” he said.

“We will go there to get a positive result although we know the difficulties that it will entail.”