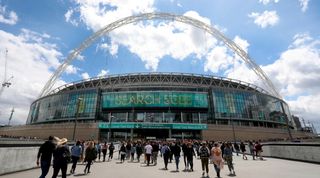 England’s national stadium last hosted the showcase fixture of European football's calendar in 2013, and is set for another final a decade on.

Sky Sports News reports that Wembley will be confirmed as the 2023 host venue by UEFA next week.

European football’s governing body usually announces venues one year at a time, but president Aleksander Ceferin is set to change the process by announcing a long-term plan.

Zenit’s Krestovsky Stadium in St Petersburg and Bayern Munich’s Allianz Arena will be named as host venues for 2021 and 2022 respectively at a meeting in Ljubljana next Tuesday.

And in 2023, Wembley will celebrate the centenary of the original twin-towered Empire stadium in 1923 by hosting the European final for an eighth time.