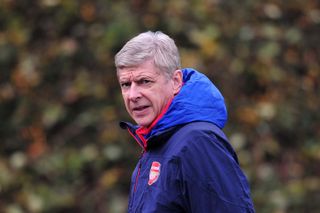 The Schalke midfielder has been heavily linked with a move to the Emirates Stadium, with some claiming to have spotted the highly rated 20-year-old at the club's training ground earlier in the week.

However, when quizzed on the subject at his weekly media conference, Wenger insisted that Draxler had not been at London Colney, and that he was no closer to becoming an Arsenal player.

"Like with the unidentified flying objects, some see them everywhere," he joked. "Are we close to signing anybody? I would say no.

"The January transfer market will not be busy, it is a low-key market this year.

"I would sign for the January transfer window to be scrapped completely."

Wenger also stressed that the club had made no approach for Dimitar Berbatov, who could line up against Arsenal for Fulham this weekend.

The former Manchester United striker is another player believed to be on Wenger's radar, although the Frenchman has played down such talk.

"Do I rate Berbatov as a player? Highly. Have we made any approach to sign him? No," he added.

Wenger was also cryptic on the chances of extending his own deal with the club.

Wenger's current contract expires at the end of the season, with reports suggesting that he has all-but agreed to remain in place.

He was more positive, however, about extending the contracts of defensive duo Per Mertesacker and Bacary Sagna, adding: "We are making good progress and hopefully we can announce something soon."