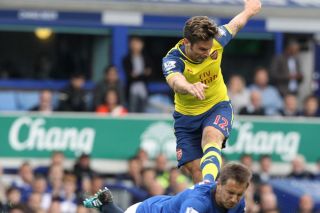 On a night when Alexis Sanchez scored the only goal of the game against Besiktas to give Wenger's men a place in the UEFA Champions League group stages for the 17th successive year, there was a sour note for Arsenal fans as the full extent of Giroud's recent ankle injury was revealed.

Attention will now shift to the final week of the transfer window after the Wenger confirmed that the France international is facing a lengthy lay-off.

He told Sky Sports: "He [Giroud] had surgery today. It went well but he will be out maybe until the end of December or beginning of January.

"I don't know yet [if Arsenal will sign anyone]. We are looking around but we want quality. We have [Theo] Walcott coming back soon; I think [Yaya] Sanogo will make an impact this season and we also have [Lukas] Podolski and [Joel] Campbell.

"To find players who are better than we already have could be very difficult now."

Giroud's problem did not take the gloss off a good night for Wenger, though, as Arsenal won the second leg of their play-off 1-0, following a goalless first game.

"It [qualifying] is a weight off our shoulders," he admitted. "We can now focus on the Premier League and think about the [Champions League] draw.

"We played against a good team but we did the job in a very united way. We showed great fighting spirit.

"We did not want to go down a division in Europe and overall we had the chances to score more. But we kept a clean sheet in both games and that made a difference."

The game was not without some nervy moments, Mathieu Debuchy's late sending off adding to the tension at the Emirates Stadium.

Wenger added: "I was very worried because you never know if players are on the edge physically.

"I thought it [the sending off] was very harsh. Debuchy played the ball; we could see that with the angle from our bench. The referee was on the other side and thought it was a foul."