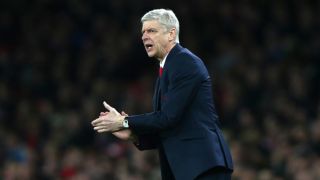 Arsene Wenger insists Arsenal will take the FA Cup seriously as he aims to win the competition for a third year in a row.

The Emirates Stadium side kick off their FA Cup campaign at home to Sunderland on Saturday and Wenger has made it clear they will do everything within their power to go as far as possible.

"Of course there is extra pressure because we won the competition last season," he said at a news conference.

"Being the holders, we want to stay in the competition and do it again if possible.

"I don’t see why the FA Cup should be ostracised because of the Premier League.

Arsenal recorded a 3-1 win over Sunderland in the Premier League earlier this season but Wenger expects a tricky encounter at the weekend.

"We have learned Sunderland are very dangerous on the counter-attack. It was a very hard-fought win against them [last time]," he added.

"I do not expect any weaknesses from Sam Allardyce. His team will be focused no matter what.

"Managers do not play weaker teams in the cup because everyone has 25 players of Premier League quality."

Arsenal will still be without the injured Alexis Sanchez, while Danny Welbeck also remains unavailable, but both attackers are on their way back.

"Sanchez is still a bit short and will not play against Liverpool next week either," Wenger stated.

"I hope that he can get a consistent presence. We’re going into a run of games where we need everybody.

"Welbeck could be back in three to four weeks."