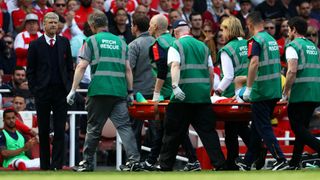 Arsenal manager Arsene Wenger is facing a defensive crisis ahead of the FA Cup final with Laurent Koscielny and Gabriel set to miss out against Chelsea.

Koscielny was shown a straight red card for a wild lunge on Enner Valencia in the early stages of Sunday's 3-1 victory over Everton, a result that did not prove enough to secure Champions League qualification as both Manchester City and Liverpool won to consign the Gunners to fifth.

To make matters worse, Gabriel was carried off on a stretcher during the second period with a serious-looking left knee injury.

He was replaced by Per Mertesacker, making his first appearance of the season and the German could be thrown back into the fray from the start against the Premier League champions at Wembley.

Alexis Sanchez also hobbled out of the action on Sunday, although the Chilean did not look overly concerned as the Arsenal players applauded those fans who had stayed behind after the final whistle.

That’s the end of our season. Three points today but it’s not enough to secure a top-four finish.May 21, 2017

"It [Koscielny's dismissal] was harsh but we have to accept the decision," Wenger said in quotes reported by BBC Sport.

"Gabriel's injury looks quite serious, especially for next Saturday. We lost two centre-backs and that's a big blow.

"It's frustrating [to miss out on top four]. It was down to one point in the end. The total is decent if you look at it over the years. We did the job until the end. We were remarkable with 10 men."

Missing out on a place in the Champions League added further fuel to fan unrest against Wenger, who is out of contract at the end of the season.

He added: "It is annoying but we had a spell during the season that was difficult and it was difficult for me in my personal situation. We were playing in a hostile environment. The players came back stronger in the last two months and I'm very proud of them for doing that.

"I was focused on my job. I am professional. I love this club enough to do my best every single day. One thing you cannot question is my love for this club. I've turned down every club in the world to stay here."