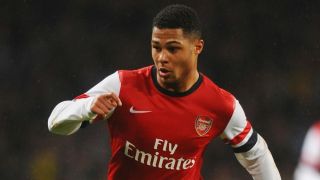 Gnabry moved to The Hawthorns at the start of the campaign on a season-long loan, but has played just once in the league for the West Midlands club, coming on for 12 minutes against Chelsea on August 23.

Following a 2-1 victory over Burnley in the fourth round of the FA Cup on Saturday, Wenger was asked if Gnabry was set to return to Arsenal early.

"Yes," Wenger replied. "I am tempted to let him go somewhere [on loan], and do with him what I did with [Francis] Coquelin," he added, referring to the French holding player, who unexpectedly became an important member of the first team last season after being recalled early from a temporary spell at Charlton Athletic.

The clash at Emirates Stadium saw Alexis Sanchez start for the first time since suffering a hamstring injury in late November.

And the Chile international played a starring role, assisting the opener for Calum Chambers before netting the winner following Sam Vokes' equaliser for the Championship side.

"Physically, he is ready. He came back well," Wenger said of Alexis, while also praising debutant Mohamed Elneny.

"He became more adventurous. His mobility, his work rate was exceptional.

"Burnley are a good side. For the first 20 minutes we looked quite in control but when they equalised suddenly you could see energy, commitment, and we had to dig deep to win the game," he told BBC Sport.

"Every free-kick you worry because Sam Vokes is very strong in the air and he scored their goal - they are strong on set pieces and we needed to be alert."