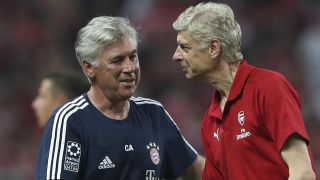 Arsene Wenger says he will play no part in choosing his successor amid reports Carlo Ancelotti could be the next Arsenal manager.

The Italian has indicated he will take the rest of the season off after being sacked by Bayern Munich last month in the wake of a crushing 3-0 Champions League defeat at the hands of one of his former clubs, Paris Saint-Germain.

Ancelotti won the Premier League in the 2009-10 season during a spell at Chelsea and he is likely to be in demand when he returns to football, with his three Champions League titles more than any other manager has won.

But Wenger, who eventually ended speculation about his future by signing a new two-year deal at Arsenal in May to extend his 21-year stay at the club, dismissed reports Ancelotti could become the next man in the Emirates Stadium dugout.

"I don't know who will replace me at Arsenal," Wenger told BeIN Sports when asked about the possibility of Ancelotti taking over.

"When you are manager of a club you have to work like you're there forever, because it demands total commitment.

"I believe as well that a football club works when everyone does their own job well.

"My job is to prepare the team for the next game and be responsible for technical policy at the football club.

It has been a great honour to form part of Bayern’s history. I would like to thank the Club, the Players and it's amazing fans. September 28, 2017